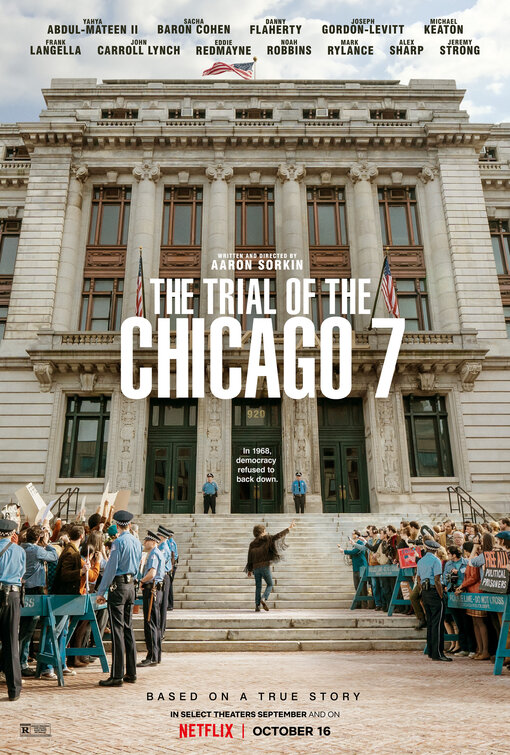 There is only one feeling I had when I came to know that Aaron Sorkin was making a film about a trial and that was pure excitement. I had a vague idea of what The Trial Of The Chicago 7 was about but didn’t want to read up on it. I’ve found that going into these kinds of films cold, works better as an experience.

What I found most impressive about the film is the way the incidents are shown. It is not A-B-C but it gives you a more comprehensive outlook of what actually happened. We get to see the events that happen around the trial and the forces that are at play. This makes us connect more with the characters and their actions.

We aren’t simply thrown into the middle but taken there step by step. This achieves the sense of familiarity that makes the events unfolding feel more poignant. And what happens on screen feels relevant regardless of which part of the world you belong to. That perhaps is the biggest strength of the film. The ability to make us feel the sense of injustice, the sense of prejudice and a sense of hope as well.

But for a film like The Trial Of The Chicago 7 to truly work, it needs to be technically strong. And truth be told, this is an area where the film does wonders. Right from the casting, to the editing and the cinematography, it is top-notch. The editing and camera work provide the viewers with different moods. It can be frenetic, it can be steady, depending on what the action calls for. That makes it feel like the film is moving and you do not get bored.

Of course, when talking about a film by Sorkin, we do have to address the writing. In fact, it is probably one the main reasons why we love to watch his films. And he is in sparkling form in The Trial Of The Chicago 7. Be it inside the courtroom or outside it, the dialogue flows beautifully. Aided by some wonderful acting, the weight of the words being spoken can be felt by us. Without trying to spoil it, there’s a moment with Yahya Abdul-Mateen II’s character that will stop you in your tracks.

Moments like these keep popping up and before you can analyze the film, you are drawn into the proceedings. I wonder how this film would work the second time when you know what happens. Will it be as gripping? Well, that is a question for another day. For now, what we have is a film that is powerful, relevant and entertaining to boot.

The Trial Of The Chicago 7 is a film that should be seen for people to understand what the cost of justice can be. Perhaps the relevance of the film makes it feel like a better film than it is. Whatever the reason maybe, all I can say is that Sorkin has done it again. Netflix have a winner on their hands and a film that can surely spark discussions. Whether it will do so is for us to answer but if there’s one thing we know, the whole world is surely watching. Keeping an eye out for justice and for those who fight for it.